The midline findings suggest that the participants through trainings have improved and are able to use soft skills, technical skills, and entrepreneurial skills. Youth groups proved to be essential for passing on new skills within the youth’s communities. Participants used these groups to teach others skills, creating an spill over effect within the communities. The increase in skills had an effect on the  interviewees’ agency.Increased confidence happened through increasing and practicing soft skills such as communication skills. Increased negotiations skills affected interviewees’ independence positively. In addition, the trainings had an indirect effect on independence by helping interviewees increase their income and thus their financial independence.

In some cases, the increased skills contributed to interviewees finding employment or self-employment. A considerable group of young men and women mentioned that they had managed to find a job since participating in the EYW trainings, or started their own microbusiness. With respect to self-employment young women were in the majority. Interviewees noted that an increase in agency helped them secure employment. In turn, becoming employed can have a positive effect on agency by making youth feel more confident in their ability to find employment.

These findings suggest positive trends on the KPIs relating to use of skills, (self-)employment, and income. However, youth – and especially the women – do still face significant barriers. The main barrier includes social restrictions. For example, family and community members often don’t agree with girls going outside alone for trainings, jobs or education. The midline findings do suggest that the increase in skills and agency allow interviewees to better deal with these barriers. In some cases, interviewees reported seeing changes within their communities as a result. 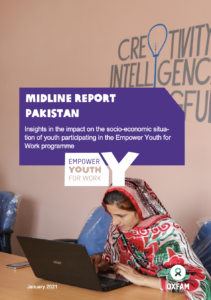