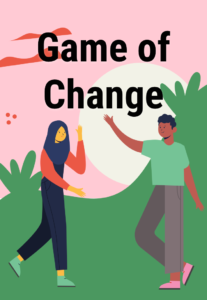 Youth have the power to change their lives and shape a better society. But they are often excluded from decision-making, and they remain invisible and unheard. This is particularly true for marginalized youth, such as youth living in rural climate change- affected areas, young women, non-binary youth, youth with disabilities… That’s why we want to create a digital tool that can help amplify the voices of young people, and support them to make changes in society. And this tool is the Game of Change.

This digital version of the Game of Change is the further development of its paper version, ensuring the consistency of the logic and content. The Game of Change is not Oxfam or project branded, it's totally free of charge and accessible for anyone who would like to use it to make changes happen. Interested in using it already? Here it is:

Three key stakeholders are involved in the development journey of the Game of Change: youth (from rural climate-change affected areas), Oxfam and Game developer companies. Young people inform us about their needs and interest in having a tool to make changes happen. And Oxfam provided content about how to make changes happen, based on the abundant experience we gathered throughout the past campaigns and influencing work. Then the game developer companies make use of their skills and technology to integrate all the content, needs and interest into a game. But the journey doesn’t just end here, youth, as the end-users, play a vital role in testing the game and provide feedback. The game developer companies also implemented gaming theory to make the tool appealing and accessible for the youth. And Oxfam delivered this Game of Change, responding to the request of young people. This is truly a collaborative effort among youth, NGO and private sectors. And the child of these collaborative efforts is the Game of Change. Through step-by-step guidance, youth will be able to learn about and implement influencing work.

According to our survey, 100% of the respondents think positively about the game.  84% of them believe this is a tool that can help them make changes happen. The majority of the respondents say they will continue using the game and share with their family or peers.  Most recently, the Game of Change is nominated by Partos as one of the top 10 most inspiring collaborative innovation awads. And our journey will continue, we will share the game and connect with as many young people as possible. Because we believe that together, we can make changes happen.