In September, roughly four million protesters, many of them schoolchildren, took part in Global Climate Strikes in 150 countries. In Bangladesh, EYW youth were at the thick of events to highlight the climate emergency and urge their government to take immediate action to save the planet. From tree planting to human chains, they made sure their message was heard not only locally but at global level.

Striking for the planet

EYW youth group members in Barisal, Khulna, Rajshahi and Rangpur helped to organize a range of events around the Global Climate Strikes on 20 and 27 September 2019, which were timed to coincide with the UN climate summit and week of action in New York. Events included school strikes, tree planting, road blocking and symbolic demonstrations to raise awareness on the impact of sea-level rise. Students of all ages got involved, with 25 school and colleges participating in the strike. More than 1,000 youth were joined by teachers, local leaders, organizations and administrators to call for their rights on climate justice.

Stopping the traffic to demand action

In solidarity with the global climate crisis movement, the youth of Barisal, Khulna, Rajshahi and Rangpur organized a human chain in their area. They blocked the road for five minutes for climate justice, and urged the government to declare a climate emergency. Almost 15 local organizations participated in the strike in Barisal and other areas.

More trees for a greener world

Young people from Khulna and Barisal planted trees in various schools and on the roadside, and raised awareness on the role of tree planting in cutting carbon emissions. Many students, teachers and community members joined the tree planting program and, most importantly, in Barisal, a local government representative came to lend support.

The EYW youth also organized awareness-raising programs on environmental and plastic pollution in almost 20 primary schools, secondary schools and colleges. They distributed bamboo baskets as a sustainable alternative to plastic for waste management.

The rising sea level is a serious concern for people in coastal regions of Bangladesh, with serious implications for agriculture, biodiversity and water systems. Children, women and elderly people are disproportionately affected. Young people symbolized the devastating impact of sea-level rise on coastal communities in Bangladesh – standing waist or shoulder high in the river – and called for an end to investment in fossil fuels.

Taking it to the top

The strike was a day of global solidarity as well as action, and the climate events in Bangladesh – one of the countries hardest hit by climate change – gained attention far and wide. On the Oxfam GB twitter page, three women in Bangladesh spoke out about the impact of climate change on their lives and communities, together gaining thousands of views. 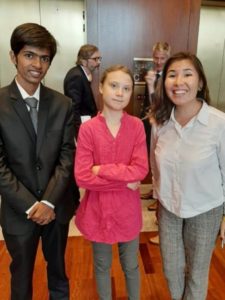 EYW youth activist Tahsin Uddin attended the Global Climate Summit in New York, where he met with Swedish climate activist Greta Thunberg, whose actions sparked the Global Climate Strikes. Tahsin is the District Youth Advisory Board member of Wave Foundation in Barishal, and was supported by Unicef to attend the summit. Tahsin, now 21, has been working to highlight the impact of climate change on his community since he was just 12. He started collecting plastic waste and selling it to recycling plants, using the revenues to plant trees and organize campaigns at school on plastic pollution and climate change. Attending the global summit was a culmination of his efforts to draw attention to the climate crisis.

The actions of the EYW youth groups during the global strike are closely linked to their work within the project. Focusing on youth in rural areas affected by climate change, Empower Youth for Work aims to promote agency and skills development, economic empowerment and enabling environment.

To address the impact of climate change, EYW youth are establishing climate-friendly businesses and bringing awareness to local communities. They are also engaged in campaigns on plastic pollution, climate change, encouraging the planting of trees and stopping pollution at the individual level.